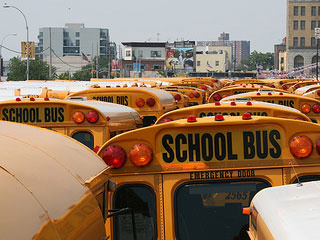 A school bus driver from Lowell was arrested on Massachusetts Drunk Driving Charges last week after she allegedly crashed with children on board.

Mary T. Morrison, 53, was arraigned in Lowell District Court on charges of Operating Under the Influence of Alcohol, 14 counts of Child Endangerment While OUI / DUI; and Leaving the Scene of Property Damage.

According to the Lowell Police Department, Morrison was allegedly driving the bus around 8 a.m. in late October with 14 children on board when she crashed into two parked cars. Lowell Police further allege that she did not stop following the accident.

With the passing of “Melanie’s Law” in 2005, the Massachusetts state legislature enacted the OUI / DUI Crime of Child Endangerment While Operating Under the Influence of Alcohol or Drugs, which now makes it a crime to operating a vehicle while under the influence with a child 14 years of age or younger.

Boston DUI Lawyer Lefteris K. Travayiakis is available 24/7 for consultation on all Massachusetts Drunk Driving Charges, including OUI /DUI, Child Endangerment While OUI, and Leaving the Scene of Accident.